ESSA Opt Out Denial from the Feds: My Comments to the State Board

In June, the State Board was notified by the US Department of Ed, that their ESSA waiver request was denied.  The State Board requested the waiver in order to comply with Utah's Opt Out law that allows parents to Opt Out of state testing without penalty to the school, the employees or the student.  (Please read the linked waiver request.  State Supt. Dickson explains it perfectly.)  The Federal ESSA bribery plan requires that 95% of all students in the state take the same state test. So, parents, your rights are being sold for federal money, and a paltry sum at that.

I addressed the State Board at their June meeting, asking them to stand strong against the Feds.  (About 2% of Utah's education budget could be at risk for not complying with this provision of ESSA.  BTW, anyone else remember how ESSA was hailed as THE most wonderful of federal education bills because it RETURNED POWER OVER EDUCATION TO THE STATES?  Also, remember how those of us who read it said that it really didn't?  Yeah.  Shocked, aren't we?)

Since that time, the State Superintendent and State Board Chair renegotiated language and requested a one year moratorium on giving opted out students a 0 for the calculation of school grades.  (Cause kids who don't take the test would have definitely received a 0 for their lack of proficiency.  Wouldn't using an average score make more sense, if you really wanted to know how a school was doing?)  The Feds approved that request, even though it won't given an accurate picture of how a school is doing--assuming you think SAGE/RISE/ASPIRE is an accurate measure.  Instead, this will create a perverse incentive for schools to bully parents to make their kids take a test they have every right to reject.  We are now pitting teachers and parents against each other.  That's a phenomenally bad idea!!

At any rate, here are my comments from the June 7 Board Meeting.

I am speaking on the denial of the ESSA waiver and ask you to defend Utah's opt out provision. The right of parents to direct their own child's education is protected in Utah law. But that right is not granted by the State of Utah. It is merely protected by the laws of our state. As such, those rights are not rights elected officials can choose to remove at the request of the US Government.

The 10th Amendment states: “The powers not delegated to the United States by the Constitution, nor prohibited by it to the states, are reserved to the states respectively, or to the people.” In a 1982, Utah Supreme Court ruling, Justice Dallin H. Oaks stated: “The rights inherent in family relationships...are the most obvious examples of rights retained by the people. They are “natural,” “intrinsic,” or “prior” in the sense that our Constitutions presuppose them..” Utah Code says: A student's parent or guardian is the primary person responsible for the education of the student, and the state is in a secondary and supportive role...

Our current opt out provision is consistent with natural rights and our state and federal constitutions. We stand on solid, legal grounds. ESSA is a voluntary grant program from the federal government. They have no legal right to require parents to not opt their kids out of SAGE testing. And the Department of Ed will never know, see or care about the students who are harmed by this policy. The State of Utah has the solemn DUTY to protect and preserve those parental rights. And yet, at the point that the Feds offer money and ask us to circumvent those natural rights, should we go ahead and do so? If ESSA were not a voluntary grant, but were instead legally binding on the state of Utah, it would be declared unconstitutional. Instead, the US Department of Education can bribe Utahns to give up our state sovereignty and the natural rights of our citizens because they offer a caveat of money if we “choose” to comply. If we agree, we “choose” to remove some of the fundamental rights we each swore an oath to protect.

In that same ruling, Justice Oaks explains: “We conclude that the right of a parent not to be deprived of parental rights without a showing of unfitness, abandonment, or substantial neglect is ...so basic to our constitutional order that it ranks among those rights referred to in ...the [Utah and the] United States Constitution as being retained by the people.”

With a single vote by this body, in exchange for monetary compensation, parents throughout the state of Utah can be deprived of their parental rights without due process, without showing unfitness or substantial neglect.

We all know from past experience that the US Department of Ed is playing a game of political “chicken”. They are hoping we will back down. How can they justify penalizing the State of Utah because we are protecting parental rights and fulfilling our oaths to support the US Constitution and the unalienable rights it was designed to protect? Please stand strong and tell the US Department of Education they must reconsider. Inform them you are unable to violate the rights of the people you swore an oath to protect. 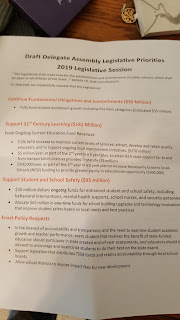