Please call Congress 202-224-3121 and ask them all to Vote No on the reauthorization of ESEA (Elementary and Secondary Education Act).  It will take 2 minutes.  Are your parental rights worth 2 minutes?

Today, Monday, November 30, Congress will release the language of the reconciled* No Child Left Behind reauthorization. So many of us are frustrated with the level of federal overreach in No Child Left Behind that we can't wait to have Congress get rid of it. However, in our zeal to throw out the bad, we are trading bad for worse...and Congress is doing it be taking shortcuts in the transparency and public involvement part of the process.


“So, from the surface it will still look like the conference process is happening, is unfolding in the manner in which it is supposed to, but beneath the surface we know that all of this has already been prearranged, precooked, predetermined by a select few Members of Congress working behind closed doors free from scrutiny, and we know this vote was scheduled on extremely short notice so it would be difficult, if not impossible, for the rest of us to influence the substance of the conference report through motions to instruct.”

This bill is going to be at least 1000 pages long, based on the two versions of the bill that have already passed.  The vote in the House is probably scheduled for Dec. 2.  That keeps changing.  But there's no way to read and study 1000 pages and then vote, all the while receiving and considering the input of your constituents all in 2-days' time.  For no other reason, they should vote no.  I was told by my then-state representative that he was often the only Nay vote on some apparently 'decent' bills.  However, if you don't have the time to read and study and understand the implications of what you are imposing on people through the force of law, it is your duty to vote NO.  If representatives would consistently vote no by default, we would start to see them (and us) get much more time to review bills and to fully study and learn about them.

This bill claims to get rid of Common Core and the process whereby the US Dept of Ed (USDOE) coerced states into adopting Common Core.  Common Core was adopted by having the USDOE establish a program stating that you get 'more points' for college and career ready standards common to a significant number of states and then clarify that significant number means 15, which then leads states to the ONLY set of standards that meet those qualifications, i.e. Common Core.  Now, the Secretary is prohibited from giving direction on what he would like to see in a state's plan.  However, he can still veto a state's plan.  So, at some point, the state will find a way to find out what the Secretary WILL actually approve, and that will be some other subset of national standards and testing that the Secretary wants to see implemented in the states.  It changes the process from the Secretary directly saying what he wants from the states, to the states playing "Mother, May I?" with the USDOE.

"USDOE, may we adopt our own science standards?"  Rejected.

"USDOE, may we adopt the Next Generation Science Standards that are not Common Core but were developed by the same group that gave us Common Core?"  Approved

The bill also expands the federal footprint into Preschool.  It's not enough that they are controlling K-12 education, now we need to allow them input into Preschool, as well.

Testing is still required at 95%.  So, even thought Utah has an opt out law that prohibits negative consequences from parents opting their kids out of state testing, the opt-out amendment passed in the House didn't make it into the reconciled version.  So, states will have to develop their own punishments for those schools who have more than 5% opt out.  Does that sound like support for parental rights and increased freedom?

Please call Congress 202-224-3121 and ask them all to Vote No, including the new Speaker of the House, Paul Ryan, who promised greater transparency.  Let's hold him to this! 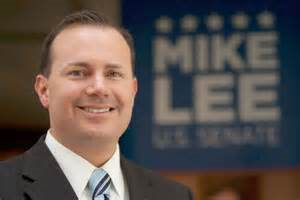 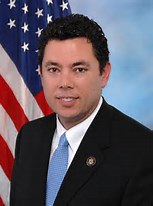 *Bill Process Primer.  The House and the Senate each passed bills modifying the existing No Child Left Behind 'law', which was just an extension of the Elementary and Secondary Education Act (ESEA), originally passed in 1965.  Because the language in both versions of these bills is different, a conference committee gets together to reconcile the differences between the two bills.  Then, the House and Senate vote on the reconciled language, and that is what is sent to the President for his signature to become a law.


Why The Next Generation Science Standards Are Wrong For Utah

Comment here: http://www.schools.utah.gov/CURR/science/Revision.aspx  Even though, the form requests specific comments on specific standards, it is perfectly acceptable to provide general comments on the standards as a whole or the process as a whole.

Unless massive amounts of people speak up, the adoption of these standards is already a done deal.


The legislature has made public comment and parent committees a requirement, since We, the People, complained about this lack when the Common Core standards were adopted.  Take advantage of the opportunity to weigh in on what our children should learn about science in this state, and how much of it should be exactly the same as every other state.  (Just curious how we get diversity of thought in scientific inquiry, if everyone is taught the same things in the same way?)

Here is a link to the Next Generation Science Standards that, if we adopt grades 6-8, will almost assuredly be adopted throughout K-12.  http://www.nextgenscience.org/  For fun, search certain terms in their search box to see where the emphasis of the K-12 standards would be.  Make sure to put things in quotes, e.g. "digestive system" or "climate change" or electron to look for those words as a pair.  Utah has made some adjustments, but if they are essentially NGSS, rest assured that all the materials that will be used in the classroom will be based on NGSS.  The changes Utah has made will have minimal impact. 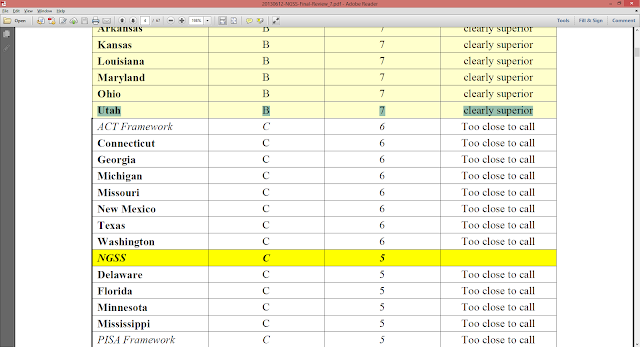 Every set of standards, of late, that has been adopted or considered has been based on national standards.  There is no evidence that national standards improve education, but it is true that parents have less say and less impact on what is taught in their local schools the further away they are from those who make the decisions.

For more information on the standards, see my previous posts.  Please share with 5 of your friends and submit your comments to the State Board!

State Board needs to Prove the new standards are better: http://wendy4asd.blogspot.com/2015/05/state-standards-burden-of-proof-rests.html

Science is Absolute, but Man's Understanding of Science is what Shifts: A Parent Letter
http://wendy4asd.blogspot.com/2015/06/parent-letter-on-new-science-standards.html

VOTE TUESDAY (today)  in your municipal elections and on the Proposition 1, transportation tax increase.
Polls open at 7 am and close at 8 pm.
Many people do not vote in municipal elections, and yet, these elections have the greatest potential to impact us on a day-to-day basis.  Please become informed and involved on a local level, and come out to vote.
John Adams said,  "Posterity, you will never know how much it cost the present generation to preserve your freedom. I hope you will make good use of it. If you do not, I shall repent in heaven that ever I took half the pains to preserve it."  Let's make sure that Mr. Adams doesn't feel the need to 'repent in heaven' for giving us this amazing opportunity for self-government.

Additional thoughts from Rod Mann, Highland City Council, on selecting candidates.  http://mannkindperspectives.blogspot.com/2015/11/selecting-candidates-for-office.html#more
PROPOSITION 1: TAX INCREASE
I will be voting NO on Prop 1.  40% of the tax revenue will go to subsidize UTA.  UTA has been repeatedly criticized by the State Auditor's Office for fiscal mismanagement.  Despite anything else, it is foolhardy to send good money after bad by giving additional funding to an entity (UTA) that has shown little ability to manage the precious taxpayer resources it already manages.  If we are willing to essentially 'bail out' UTA for fiscal mismanagement, this sends the wrong message to our elected officials and other bureaucrats: "Spend our money poorly, and we'll still keep giving you more."
Arguments for and against Proposition 1: http://www.utahcounty.gov/Dept/ClerkAud/Elections/documents/OnlineVIPS.pdf

I will be supporting Tim Irwin and Tim Heyrend.

Mr. Irwin (http://votetimirwin.com/) is an incumbent with a record that matches my principles.  He has been firm in working to pay down our debt and cut expenditures that don't meet the high standard of what funding should we appropriately force from our neighbors.  While firmly focused on safety issues, he is clear that the debt pay-off must be a major priority.  Every year, Mr. Irwin has gone through the city budget, line by line, looking for things that could be reduced or changed.  For me, an incumbent must earn my vote through their record.  You must give me reasons to vote FOR you, not just keep things 'status quo'.  Unless an incumbent has shown, through their voting record, a consistent match with the principles they espoused (and with which I agree, largely), then my hat tip will always go to a newcomer to public office.  In this case, Mr. Irwin has a record I am pleased with.  He stands on Constitutional principles and his votes match those same principles.  He has "re-earned" my vote.

Mr. Heyrend (  http://heyrend4highland.com/Home/) has a background in and is currently employed as a civil engineer.  His experience will be helpful in dealing with many of the infrastructure issues that we have in the city.  He is committed to paying down our debt and has stated he will focus on cost-saving road repairs to keep our expenditures low while maintaining public safety.  I believe the experience he brings to these issues will be quite valuable.  As my precinct chair, Mr. Heyrend has made efforts to keep our precinct informed of the activities he has been involved in as chair, and has also invited our participation for votes and other important public/community events.  I expect that trend to continue if he is elected.

The other two candidates are: