ASD ELECTIONS
Three Alpine School District Seats are up for election: East Orem, PG/Lindon, and Lehi.  Only one of the incumbents is running for re-election.  I cannot stress how much more important I view the local elections than the national or even state ones.  If we were to hold our national representatives to the amount of involvement that they should have (under the Constitution), we would not be impacted by who was in those offices very often.  It is the failure of us, as a people, to maintain control at the local level.  Please encourage all your friends and neighbors in those areas to get involved, support and knock doors for the candidate of their choice, and to reassert the local community's interest in the education of our children.  If we are willing to stand up and desire that level of control, we would be able to wrest it back.  It would take some doing, but we have to show we are willing.   Please look for candidates who don't say we are willing to 'work within the system' when the system is broken.  Look for those who would be willing to tell the State Board or the Legislature or the US Dept of Ed, "These are our kids, and  we will be responsible for them."


BOND
The biggest issue in the district right now is the bond.  Go here: http://alpineschools.org/bond2016/ for information on the bond.  I voted to place it on the ballot.  I am not sure if I will be voting for it, personally.  I do hope that all of you will contact your legislators and ask them to support allowing impact fees to be collected to prepare for school growth in advance, until waiting until it's crazy and a middle school has three lunches because they can't accommodate all the kids inside the main building at once.  There are 4 videos, along with charts and graphs and a list of bond projects.  There are public meetings being held, and you can always email and ask any questions you might have.


CIVIL DISCOURSE
And finally, two years ago, when I ran for re-election, it was one of the most painful things I've endured.  It was a refining moment for me in so many ways.  I do not think I fully appreciated the difficulty that people operate under when serving.  When my predecessor left the district, she said in the meeting that a wise man once said, "When you are in the service of your fellow beings, you are only in the service of your God."  Not to offend those who don't believe in God, but you have to approach public office as service to your fellow beings.  And that service comes whether people agree with you or not.  By the same token, we get better government the more we are involved.  And that means every, single one of us needs to be informed and involved.  But it also means we won't agree and we will have conflict.  However, as long as we value the person with whom we disagree and do not assume their intentions are evil, we will be able to have greater discourse and find more solutions in the long run.  I am including my post from two years ago, during that 'fun' time of re-election.  I ask, again, that no matter what side you take on an issue or on a candidate, do not assume that someone who disagrees with you does so from a point of moral inferiority.  http://wendy4asd.blogspot.com/2014/10/you-dont-care-about-kids-civil-discourse.html


Most people you meet care about kids.  People involved in education pride themselves on their commitment and the nobility of working with and wanting to provide a good education for the next generation.  However, when the discussion turns to specifics of policy, spending, and issues in education, the opposing sides trot out the famous line (or some variation thereof), "You don't care about kids!"  I know.  It's a common theme. Not all that original.

Stop and think for a moment.  Of all your friends and neighbors--people you know well--what percentage of them would you say don't care about kids?  If you were to extrapolate on that number, what percentage of the inhabitants of Utah don't care about kids?  For me, I don't know a SINGLE person who doesn't care about kids. I really don't.  What that means is, based on my experience, I should not ever encounter a person who doesn't care about kids.  And, honestly, I don't think that I have, to date.  Oh sure, I have met all kinds of people with whom I disagreed on all sorts of education policies.  I have met people with whom I have had passionate discussions.  But through it all, I have never doubted that they cared about kids.  I have, honestly, doubted how their positions would lead to better outcomes for kids, or, practically, how a nice-sounding idea that wasn't grounded in reality could possibly work.  But, as far as their motivation and their intent, I have yet to come across anyone in any capacity that truly wanted to do harm to or was apathetic toward the children in their purview.

That's not to say there isn't evil in the world; there is.  But, I don't know those people, and, most likely, neither do you.

A few weeks ago, a friend posed the question about the difference between conflict and contention.  A person I do not know responded that the difference was contempt.  She went on to explain that when you see someone as worth less than yourself, you treat them with contempt.  Since we shouldn't be treating people as worthless, all are valuable, especially from a religious perspective, then we should never treat people with contempt.  Even those with whom we disagree. Even those who we think are about as wrong as they could possibly be.  Error is the human condition.  We all make mistakes.  And it is that human fallibility our Founders wanted to make sure was tempered with checks and balances and a lot of public discourse.  But to have true public discourse, people need to actually talk.  And that talk must allow for different perspectives and understanding.  Impugning of motives will shut down productive discourse faster than anything.  People can be wrong, but not have bad intent.  I learned a long time ago, that disagreeing or even being angry with someone doesn't mean you have to malign their character or treat them poorly.

So, my challenge to every single person reading this blog (but most especially to those who are supporting me this election season): do not give in to contempt.  Conflict, disagreement, vigorous debate--ABSOLUTELY!  Contempt, disrespect, and the impugning of motives--REJECT IT!  You may not understand why someone does what they do, but don't assume they are doing it for malicious reasons.  Thumper's dad was right, "If you can't say somethin' nice [about someone's character or motives], don't say nothin' at all."  You haven't walked in their shoes.  So really, you have no idea what is in their heart.  Give them the benefit of the doubt.   Most likely, they are human with a different set of experiences, and, I'm pretty sure, they do care about kids. 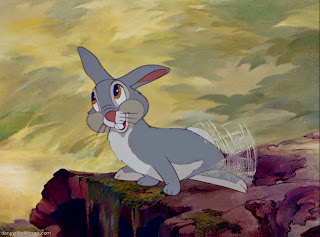