Tonight (Thursday, April 14, 2016), the State Board's Finance Committee will be discussing a request to expand their data collection to include addresses for every public school student in Utah.  Currently, the local boards/charters do not send address information to the State.  (There is, arguably, some information sent as part of the transcript program, according to one board member.)

Here is a link to the memo about this change: http://www.nga.org/cms/home/news-room/news-releases/page_2009/col2-content/main-content-list/title_common-core-state-standards-development-work-group-and-feedback-group-announced.html

My problem is this is such a horrible idea, I can't even imagine why this isn't a non-starter.  Of course, as a database analyst, I completely understand how easily this additional information could be compromised or used to correlate additional information from other databases. I would like to state for the record, again, there is no longer any data privacy on students.  There are too many databases, with too many pieces of information to assume that much of anything is private anymore. 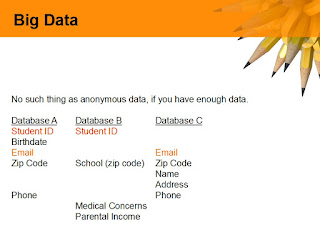 But most people aren't concerned about data privacy.  The question, though, is more fundamental: Who Is In Charge?  or rather: Who Should Be In Charge?  That answer is parents.  We have never, in the history of the world, been in a situation where so many unknown entities had access to so much information on our children and were empowered to use that information to make determinations about our child's "best interest" without going through those who know them best and love them, or in more and more cases, who have ever even met them.  Our children are reduced to data points, human capital, figures in a ledger (or a database), dots on a graph.  They are proficiency scores or the reason a school is getting a low grade.  It is truly hard to assume we are talking about living, breathing, human children anymore.

The thing that sticks in my craw is the memo states that the changes to allow address collection 'could be done easily within a week.'  Why that infuriates me so much is that two years ago, my then State Board Member addressed the issue of student privacy and opting out of SAGE with then-associate superintendent Judy Park.  The issue was that if my child is not taking SAGE, all his/her data is uploaded to the SAGE database on the testing-vendor, AIR's servers.  So, despite my desire to protect my student's private information, AIR has everything on them except their test answers anyway.  It would be a simple procedure to create a button on every local student database that I'm aware of to allow parents to check whether or not they wanted their kids opted out of SAGE. If they opted out, then the UTREX and any other process could be modified (I could personally do it in 5 minutes...and offered...for free) to exclude that information from going to AIR.  But now, because this is something that the bureaucracy likes, it can be done in a week.

But back to addresses, there are a couple of reasons as to why this is a bad idea besides the data proliferation and the fact that the USOE really should have no right to the level of information on my kids than it already has.

The argument in favor is two-fold.

1) Some charter schools are not properly reporting their students' District of Record (DOR).  This has financial consequences for the districts.  However, unless kids are starting out at the charters in Kindergarten, the districts are already aware of kids moving to charters, through academic record requests, etc.  If the charters are doing it wrong, then the State Board is authorized (since it is state law) to create a policy with penalties for non-compliance.  Target those who aren't doing it right, instead of asking everyone to submit to more supervision by the state.

2) The AG's office wants to have this information to find out if there are kids at home when they serve No-Knock warrants.  I'm pretty sure there are already legal means (subpoena's etc) that would allow them to get this information from the local district.

In short, I'm much more comfortable with this information staying at the local district level and even being tracked at that level, rather than at the state level.

Here are some additional concerns with this change.

Foster parents/Custody battles/Domestic Abuse: There are some sensitive situations with certain families where errors at the local level are just compounded at the state level.  Arguably, the local school will know the ins and outs of a sticky family situation, e.g. kids in foster care, and loss of custody by biological parents.  Given that, they would be able to screen any potential issues before giving access to everyone who is associated with that child's record, even if it may not have been classified correctly.  (A friend has experienced this exact situation, so it's not that things like this don't happen.)  At the state level, it is just names, faces, addresses.  There is no context, and so, there are situations where information could be shared, improperly, with the wrong people, causing serious harm.

Security: Right now, to get student address information for a hacker or an ad guy, you have to hack all the different districts' and charters' systems.  You'd have to be very interested in order to do so.  At the state level, it's a single database.  Which are you going to choose?  The more information the state has, the greater a target it places on our kids' information.

Family Engagement Plans: Conveniently, the new replacement for No Child Left Behind includes the requirement for a state Family Engagement Plan.  (Irreverent commentary from a leftist education blogger found here.) The federal plan recommends home visits for every child.  This will make it very easy for the state, should they choose to follow the federal plan, to already have addresses.  I find it not the least bit ironic that when former State Superintendent Martell Menlove was asked about data privacy at the state level, he used the example of those kids who got perfect ACT scores. He wanted to send them a congratulatory letter, and he had to contact each local district to be able to send those letters to the students.  This was his 'proof' about how little information the state collects on your kids.

Third-party sharing: FERPA (The Federal Education Rights and Privacy Act) modified the requirements for sharing data with a third-party.  As long as you can justify it as being for an 'educational program', data can be shared with any third-party without parental knowledge or consent.  If the data is kept at the local district/charter level, then parents need to make sure the locals are not sharing this data.  Once we, the locals, send it to the state, then parents need to make sure the locals and the state keep their children's data private.  Is it easier to control your locally-elected officials and administration or the state-level ones?

Email the State Board of Education (board@schools.utah.gov) and ask them to leave address information at the local level where it belongs.  Even better, come to the public comment portion of the board meeting tomorrow (Friday, April 15) @ 8am.  To sign up in advance for public comment, contact Board Secretary Lorraine Austin (lorraine.austin@schools.utah.gov or 801-538-7517) prior to the day of the meeting, or sign up at the meeting by 8:00 a.m. Priority will be given to those that sign up in advance.
Posted by WKH at 7:45 PM No comments: